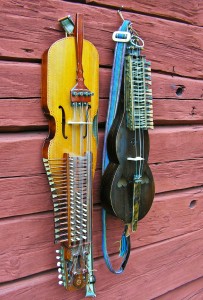 The nyckelharpa, literally “key harp”, sometimes called a keyed fiddle, was common in the Baltic region during the medieval period. It was often pictured on church murals and the oldest image of a nyckelharpa is from the 1350’s in the Källunge church in Gotland.

The instrument is said to have been created in the 1200’s or 1300’s. The oldest preserved nyckelharpa is from 1526 and is a type of mora
harp.

The keys shorten the strings to make different notes. The swedish word for key is “Nyckel”, hence the name nyckelharpa.

Originally it was a rather simple instrument with few strings, a smaller sound box than today, and fewer keys. Over time the instrument has changed and adapted to fit a more modern sound aesthetic. In the 1700s, the nyckelharpa was fitted with sympathetic strings, following the example of Indian instruments which Englishmen had brought back to Europe. The sympathetic strings are not played with the bow; they vibrate beneath the main strings and help to create a richer sound. All older types of nyckelharpa such as moraharpa, bassharpa and silverbasharpa, are drone instruments. This means that a note or chord is continuously sounded throughout most or all of a piece.

The modern nyckelharpa, also known as chromatic nyckelharpa since you can play all half-steps in all keys, is no longer a drone instrument. Today the most common model, which was invented by the musician and instrument maker Eric Sahlström, has 4 playing strings, 12 sympathetic strings, and 37 keys. A short bow is needed because of the way the instrument
is held.

Over the last two hundred years the nyckelharpa has not only regained popularity in Uppland and the original area of its creation, but has now spread throughout the world.

About the Harp guitar: 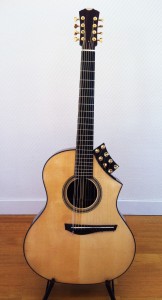 Custom built for Daniel by the luthier Mats Nordwall in Stockholm, the guitar has 16 strings. 8 are called ‘harp strings’, and the rest are similar to a regular guitar, with the addition of a bass course, two strings tuned an octave apart.

The harp strings can be tuned to fit in different keys. Daniel always starts from a simple A-minor scale, a b c d e f g a.

The bass course is tuned to A, and Daniel tends to drop the lowest E string to a D, dropped D tuning.

Starting from the lowest bass course to the highest harp string the tuning is: A D A d g b e – a b c d e f g a.

The first true harp guitar was produced in Paris around 1773 by the harp maker Naderman. It had 6 extra bass-strings, which is still the
most common type of harp guitar today.

Two other very celebrated guitar makers were the Swedish brothers Carl and August Larson, The Larson brothers. In the 1880’s they immigrated
to Chicago from Kalmar, Sweden. Between the 1890’s and 1940’s they produced a wide variety of different styles of guitars, mandolins,
mandolas, ukeleles, and harp guitars. Their instruments continue to be sought after by musicians for their distinctive tone quality.

About the five stringed violin

Emma plays a “Quintone” – a five stringed fiddle tuned in c-g-d-a-e built by Peter Volkmer, Potsdam, Berlin.
Quintones have been built from ca. 1730 onwards particularly in France and Germany. They were also known as “dessus de viole”, “viola pomposa”, “violetta” or “violino pomposo”.
Around 1800 frenchman M.Woldemar build a five-string viola, named “violon alto”, with which it was much easier to play soloparts of violaliterature of that time. As well did N.Chappuy in Mirecourt around 1740. His quinton was tuned diverse: g-d-a-d-g .
Thus the violin players avoided to change positions. Shape and body-length have been more or less that of the violin.

With regard to modern demand of sound volume and carrying capacity, Peter developed a body-shape that combines sufficient corpus volume with the space necessary for any bow movement.